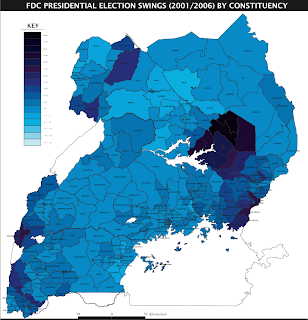 In a few months' time, Ugandans go to the polls in both presidential and parliamentary elections.

With election fever now hotting-up in the country, I thought that I would begin my own coverage by examining what is rapidly becoming the main story of the presidential election: opposition disarray.

In mid-2009, four of the main opposition parties, including the Forum for Democratic Change (FDC), the Uganda Peoples' Congress (UPC), Jeema and the Conservative Party, joined up to form the Inter-Party Cooperation (IPC), to field a single presidential candidate against incumbent Yoweri Museveni.

At the time, there was great optimism that a united opposition could succeed this time around. If they could reproduce the swings seen between the 2001 and 2006 presidential elections (see map 1), then they would have a good chance of success. As map 1 shows, this period saw the opposition making significant gains in some of the most populous parts of the country, especially in the East and the Southwest.

However, since forming the alliance, the IPC has been plagued by in-fighting. In particular, its biggest member, the FDC, has suffered a protracted leadership dispute between Kizza Besigye (who was Museveni's main challenger in both of the last two elections) and former army commander Mugisha Muntu. Although Besigye has now formerly won this battle - by winning the FDC nomination in late April - the dispute has left the national party deeply divided. 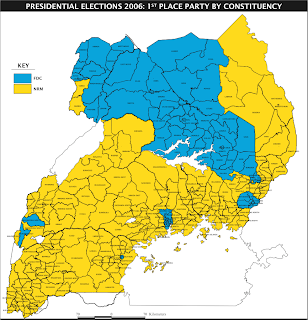 More significantly, the Democratic Party (DP), which remains outside of the IPC, has since fielded its own presidential candidate, the charismatic Norbert Mao. Mao hails from Gulu, and is a prominent member of the northern political scene. His candidacy will therefore split the northern opposition vote - in the region in which Besigye won the majority of his constituencies in 2006 (see map 2).

In addition, former diplomat Olara Otunnu, another prominent northern figure, has also joined the race, and this may further fragment the opposition vote in regions north of Lake Kiyoga.

Certainly, there are still a number of unknown factors here. In particular, it is not clear whether recent expressions of, and trends towards, Baganda nationalism will lead to the emergence of a 'Baganda vote'. If such a bloc vote were to emerge, then it could potentially alter entire balance of the whole race. However, Museveni remains popular among many Baganda voters, especially women, and his group of government Baganda MPs remains strong. And, of course, as the incumbent, Museveni has both the finance, and the apparatus of state, on his side.

In response to their current predicament, the opposition have sought to shift all of the blame onto Museveni and his ruling National Resistance Movement (NRM). For example, in the last few weeks, they have attacked the Electoral Commission (EC) as corrupt, and as a puppet of the government. The IPO have even said that they might withdraw from the elections if the EC is not reformed.

Certainly, the EC, in its current form, is largely controlled by the NRM. Nevertheless, these recent opposition attacks should still be seen as a tactic on their part, to deflect from their own current position of weakness.
Posted by Dr Richard Vokes at 10:26 PM No comments:

The politics of anti-homosexuality

On the day that a court in Malawi has found the gay couple Steven Monjeza and Tiwonge Chimbalanga guilty of 'unnatural acts and gross indecency' - for which they now face up to 14 years in jail - I am reminded that Uganda's infamous 'anti-homosexuality bill' is still not quite dead:

The fact that it is taking Museveni so long to kill off this bill - which he has been explicitly against since at least late October - highlights the strains that now exist been the president and parts of his parliamentary party. In particular, over the last couple of years, tensions have begun to emerge with a number of younger NRM MPs, who have begun to pursue their own agendas which are sometimes at odds with Museveni's avowed policies of social equality.

The author of the anti-homosexuality bill, David Bahati, is a prominent member of this new generation of 'young turks'.

It is illustrative that when the president, and several of his senior loyalists, first spoke out against the bill, in late 2009, they were more or less ignored by large sections of the parliamentary group. Instead, several of the young turks, and their allies (including Ethics and Integrity Minister James Butoro) went on a counter-offensive, and gave wide-ranging media interviews in which they sought to defend the draft legislation.

Eventually, Museveni issued an executive order in an attempt to quash the bill, citing the fact that it had by then become a 'foreign policy issue', due to negative donor reactions. However, even this did not silence the young guns - who were by now enjoying their 'moment in the sun' - and they continued to mobilize support for the legislation.

Finally, the president was forced to create a special committee to examine the bill. Chaired by a staunch Museveni loyalist, Adolf Mwesigye, the committee finally reported last week, and emphatically found '99 per cent' of the draft legislation to be either 'unconstitutional' or 'redundant'. It will be interesting to see whether this judgement will finally destroy the bill. We can only hope...

I will return to popular perceptions of homosexuality in Uganda in a later blog. However, it is interesting to note the political context in which the legislation itself has developed, not least because similar contexts now appear to be driving the development of anti-homosexuality legislation in other African counties as well.

However, before passing final judgement on the African lawmakers behind these new bills, we should also note that the legislation under which Steven Monjeza and Tiwonge Chimbalanga were convinced today was in fact created by the British colonial administration of (what was) Nyasaland.
Posted by Dr Richard Vokes at 9:45 PM No comments:

The trouble with oil

Here's a subject that we will be returning to again: Uganda's newly discovered oil reserves.

Since late 2007, reserves of between 2-6 billion barrels have been found by the UK's Tullow Oil, in the Lake Albert basin. When production starts later this year, Uganda could become the fourth biggest producer in Africa.

In a recent report, the National Planning Authority (NPA) suggested that oil revenues will transform the country's economy, reducing its reliance on foreign aid (which currently accounts for 32% of the budget), and turning it into a middle income country by 2015.

However, much will depend, of course, on how the oil funds are distributed, and the arguments have already begun:
Thus, before even a single barrel has been produced, the 'black gold' is already raising both political and ethnic tensions.
Posted by Dr Richard Vokes at 5:47 PM No comments:

Email ThisBlogThis!Share to TwitterShare to FacebookShare to Pinterest
Labels: Oil

More than two and a half years after the event was held in Kampala, talk of 'CHOGM' continues to stir the passions in Uganda. On Tuesday, Public Accounts Committee chairman Nandala Mafabi was due to table the findings from his seven-month enquiry into the alleged misuse of public funds from the meeting. However, the Speaker of the House decided to block the presentation, citing unnamed procedural irregularities as his reason for doing so. Much acrimony ensued.

The truth is that no one within the upper-echelons of the NRM wants the report to see the light of day. Mafabi's enquiry was begun in mid-2009, at the end of a year in which the ruling party were rocked by a series of major corruption scandals:
Already damaged by these scandals, the last thing Museveni's government needed was a series of further allegations, that up to UgSh 500 billion had been embezzled from the CHOGM funds. Moreover, as these allegations developed, into 2009, it was further suggested that Museveni himself may have sanctioned some of the moody deals involved. Certainly, the President himself was the star witness at Mafabi's probe.

No, no one within the NRM wants any more talk of CHOGM. But the meeting is far from over yet.
Posted by Dr Richard Vokes at 12:25 AM No comments:

Welcome to the Africanist blogspot:

The purpose of this blog is to provide comment on social and political developments in Uganda, and the wider Great Lakes region. Its posts will be concise and analytical, and will attempt to make sense of the daily headlines, and broader trends. Guest bloggers from Uganda will also be featured, as and when their views are relevant to the subjects at hand.

The site will be mostly in English, but also in Runyankore/Rukiga. Other Ugandan languages are also welcome.