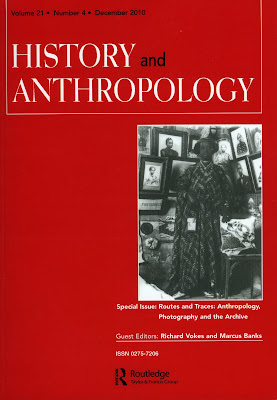 We have recently published a special issue of the journal History and Anthropology, entitled Routes and Traces: Anthropology, Photography and the Archive. The collection is co-edited by myself and Marcus Banks, of the University of Oxford, and explores recent debates concerning the interpretation of historical ethnographic photographs.

The collection includes chapters on Papua New Guinea, the Philippines, West Africa and elsewhere. However, my own contribution explores the early history of the camera in Uganda, especially in the period around the staging of the famous Kampala Agricultural and Industrial Exhibition (which was held on the newly created show-grounds, below Mengo Hill, on 9th November 1908). Like other colonial expos of the time, the Kampala Exhibition was a key event in the early development of the colonial state in Uganda.

Many of the 'official' photographs that were taken in and around the Kampala Exhibition were produced by one photo studio, the Alfred Lobo Studio, which was opened in Entebbe in 1904, and which later moved to Kampala - where it remained until its closure circa 1939. Very little is known about Alfred Lobo himself, or about any of his studio's staff. The few biographical details we do have are neatly summarized in the Royal Commonwealth Society Photographers' Index, at the University of Cambridge Library. Nevertheless, my article argues that much can still be deduced from Lobo images about the contexts of photographic production, and circulation, in Uganda at this time.

Specifically, the article argues that many 'official' photographs of this period were taken in an attempt to represent the new Uganda colony as an inclusive, even collaborative, social project - one in which all of Uganda's ethnic groups, and all classes of its European colonists, had some part to play. However, these intentions were subsequently lost, as the photographs themselves were later circulated, and reproduced, in new ways. In particular, the article traces how several images from the Exhibition were later reprinted in a series of picture postcards, in ways which instead cast their African subjects in largely negative, and in some cases overtly racist, terms.

The contents of the special issue can be viewed here, on the Taylor and Francis website. This contents page currently allows the introduction to be downloaded, and it also includes an audio-interview I recorded with journal editor Stephen Lyon, in New Orleans in November 2010. The interview discusses the evolution of this special issue, recent scholarship on African photography, and some current general issues in visual anthropology.
Posted by Dr Richard Vokes at 4:47 PM 3 comments: