LRA on the march again

The first time I was told that the LRA were on the brink of defeat was in 1997. Since then, the rebel group has shown a remarkable ability for sustaining their insurgency, even in the face of (at times) massive military opposition to it.

The current round of military pressure against the group was begun in December 2008, with the launch of the Ugandan Army's (UPDF) Operation 'Lightening Thunder'. Targeted against the LRA's main bases in North-eastern Congo (DRC), the operation - which had the support of the Congolese Army (FARDC), the Sudan People's Liberation Army (SPLA), and even the US Africa Command (AFRICOM), aimed to achieve a final defeat of Joseph Kony's men with 3 weeks.

The operation got off to a poor start, with the Ugandans failing to deliver enough men and supplies to the front line, and with the LRA receiving tip-offs about the attack (many of the Ugandan soldiers involved in the operation were themselves decommissioned LRA fighters, some of whom remained loyal to their former boss). Nevertheless, as the months went on, and especially following the UPDF's entry into the Central African Republic (CAR) in mid 2009 - to which many LRA leaders, including Kony himself, had fled in February of that year - the tide began to turn in the UPDF's favour.

Into late 2009, the UPDF began to score some significant victories, including the capture of one of Kony's most senior officers, Major Okot Atiak, and the killing of at least seven other senior LRA leaders. In November, another senior commander, Lt. Colonel Charles Arop, surrendered to the UPDF. It later transpired that on 2nd October, the UPDF had come close to securing the biggest prize of all when, in an attack in Djemah in Eastern CAR, they had fired upon, and almost captured, Joseph Kony himself. 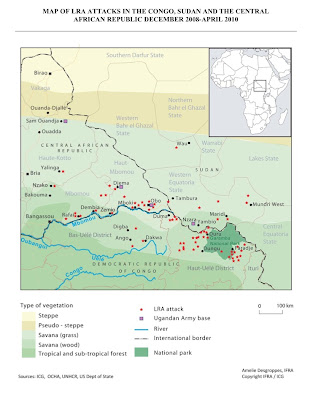 However, the optimism which followed these victories proved short lived. By the end of 2009, it was increasingly obvious that these military successes were coming at a terrible price, as the LRA, in its weakened state, was carrying out ever greater predations on surrounding civilian populations, as the group looted supplies, and sought to bolster their ranks through the forced recruitment of child soldiers. In one attack in December 2009, LRA fighters killed an estimated 345 civilians over 4 days in Haut-Uele (DRC) in the largest single massacre in the group's 23 year history. By August 2010, it was estimated that in the preceding 18 months, Kony's men had killed up to 2000 civilians (which would again make it the bloodiest 18 months in the group's history). Over the same period, the LRA had also kidnapped 1,600 more people, and had caused a massive 300,000 to flee their homes.

In addition, despite the UPDF's best efforts to disrupt Kony's command and control structures, by mid-2010 the LRA had reestablished organizational coherence, by moving to a 'zonal' mode of operation. In this way, each remaining LRA commander was allocated a particular zone in which he could operate without further authorization from Kony. Thus, Kony's brother, Major David Olanya, was allowed to operate freely in Maboussou-Gambala (CAR), General Binasio Okumu in Obo (CAR), and so on. Operating as independent units in this way, the LRA became much more difficult to disrupt than it had been previously, and it was able to operate over a much wider area. By mid-2010, the group's increasingly bloody attacks were being carried out as far apart as the extremes of Orientale Province (DRC), Western Equatoria (Southern Sudan) and in Eastern CAR as far north as the border with Chad.

At the same time, the UPDF force deployed in the CAR in pursuit of the LRA had began to run into problems of its own. Primary among these was a wave of infighting among the leadership, which eventually resulted in the force commander, Colonel Emmanuel Rwashande, being replaced. In addition, the Ugandan government decided to withdraw 1000 of the 7000-strong force, and to redeploy these men to Karamoja in North-western Uganda. Further drawdowns are also likely as President Museveni seeks to bolster security back home ahead of the next February's presidential elections.

Thus, by September of this year, the LRA had become significantly emboldened that they appear to have made contact with the Khartoum controlled Sudanese Armed Forces (SAF). The LRA was formerly equipped by the SAF throughout its long-running insurgency in Northern Uganda. If these reports are true, it would suggest that LRA leaders are confident that they may once again prove useful to the Khartoum regime - especially if, as expected, the forthcoming referendum in Sudan results in a further round of conflict between the SAF and the SPLA.

Last week's report that Kony himself has now moved to Darfur might also point to this Khartoum connection. So too would recent reports that the LRA are also now forging an alliance with another CAR militia, the Union of Democratic Forces for Unity (UFDR) - another longtime proxy of Khartoum. Certainly, if the LRA and the UFDR were to join forces, then it would bode ill for UPDF troops in the CAR, especially given the wealth of fighting experience, and sophisticated weaponry, upon which the UFDR can draw.

I was recently at a conference at which I heard, in a paper given by a European government official, that the LRA insurgency was now on the wane and that, following the passing of the recent anti-LRA bill by the US Congress (in May this year), that the group should now on the brink of a final defeat. I hope that he's right, of course. However, the first time I was told that the LRA were on the brink of defeat was in 1997.

Posted by Dr Richard Vokes at 8:01 PM No comments: