The latest edition of African Affairs (Vol. 111, No. 445: 673-675) carries a review of my book Ghosts of Kanungu: Fertility, secrecy and exchange in the Great Lakes of East Africa (James Currey, 2009). The review is written by Professor Richard Fardon from SOAS, University of London: 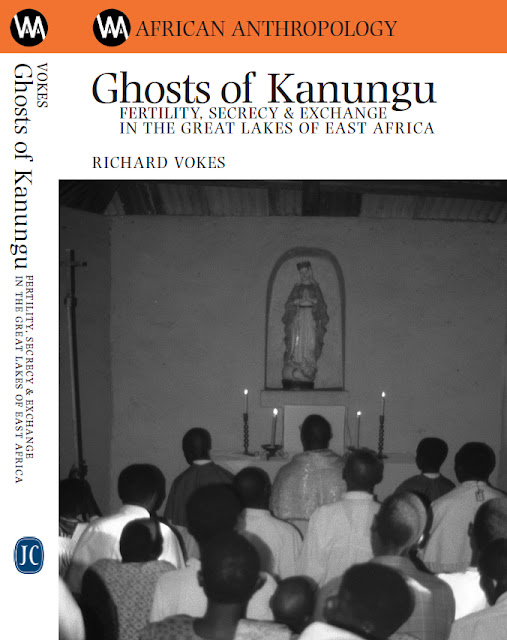 Richard Vokes has written a compelling account of the tragic events that hindsight suggests were to culminate in 2000 with the deaths of some hundreds of members of the Movement for the Restoration of the Ten Commandmants of God (MRTC) in the south-west of Uganda.

Ethnographic monographs on Africa, whatever their other virtues, can rarely be described as riveting from first to last, but this one is. Its achievement is to explain the concatenation of events around the demise of the MRTC without foreclosing every doubt about the exact nature of those events. We shall never know with certainty what happened in March 2000, but Vokes has worked tirelessly to derive a plausible narrative by placing the documented events in the context of the various forces – of the past and the present, the relatively local and global –working upon them.

The book opens with the scenario as it appeared to a newcomer – as Vokes then was – and closes by revisiting the same scenes in the light of eight years of investigation. A fire in a building at the headquarters of the MRTC in Kanungu immolates many of its surviving members. As well as the remains of a last meal, a wall calendar is found that laconically records for 16 March 2000 ‘world’s end’, and for 17 March ‘bye’. Vokes, who had arrived earlier that month intending research in south-west Uganda, caught the news item on CNN in Kampala. From the outset, media, police, politicians, and so forth began to apply different glosses to what had taken place. Initially in Kanungu, then in the following days at other MRTC properties, investigators discovered mass graves, some of them simply bodies tipped into pit latrines. What mixture of murder or cult suicide might explain this? The answer involves our retracing the history of this ‘African-Initiated Church’ (AIC) to learn about its antecedents, expansion, teaching, and demise.

Historical reinterpretation is needed for one set of antecedents to become apparent. The Nyabingi cult appears in records of the colonial period primarily as a movement of resistance. Vokes argues that this was only one guise adopted by a network of relations, exchanges, and initiatory knowledge that sought to redress misfortunes, particularly infertility in narrow and broad senses. The MRTC took part of its template from Nyabingi, one reason for the MRTC being unusually secretive for an AIC. Between Nyabingi and the MRTC stood a historical mediator in the shape of Roman Catholicism. The White Fathers were distinctive and successful, at least vis-à-vis the Church Missionary Society, for reasons that included both their practical attempts to improve the lives of their parishioners, and their advocacy of the protective role of the Virgin Mary, particularly in women’s affairs. Nyabingi, as one informant put it, became a Catholic, and in the process also became anthropomorphized. With the retirement of the last overseas missionaries, the Church passed into local hands, and Africanizing initiatives were encouraged after Vatican II.

The central figure of the drama, Ceredonia Mwerinde, was visited by the Virgin Mary at a site particularly associated with Nyabingi in its guise of anti-colonial struggle. Over time these visions began to specify a whole style of life and of worship. Adherents set up their own sites of worship and residence, the MRTC being eventually expelled from the Catholic Church, taking some clerics with it. Growth of MRTC as an AIC correlated with the worst onset of AIDS, and its adherents were largely drawn from those most marginalized, particularly young AIDS widows in polygamous households, possibly descendants of migrants, as well as other women at risk economically. What property they retained was made over to the MRTC in expectation of security. Meanwhile, under the influence of international Marian contacts, the leadership of the MRTC turned increasingly to preoccupation with the doctrines of the final days. Illness, particularly malaria, broke out in the cramped collective dwellings; drought led to hunger approaching starvation; and, as they died, increasingly the group cut themselves off. The end was mostly likely suicide by poison, the dead engulfed by a fire set by the last to die.

What is so compelling about Vokes’s account is the sense of forces and events conspiring together towards tragedy. Along the way, Richard Vokes generalizes theoretically and methodologically for his anthropological readers likely to be interested in such things, but these passages are neither extended nor obtrusive (whether or not they are necessary) and readers of this journal will not find they obscure the narrative thrust. This is amongst the outstanding Africanist ethnographies of recent years: a splendid combination of ethnographic investigation with the evaluation of texts and images, and a significant addition to the literature on African-initiated Churches.

For more on the book, visit the Kanungu project website, which is available here.