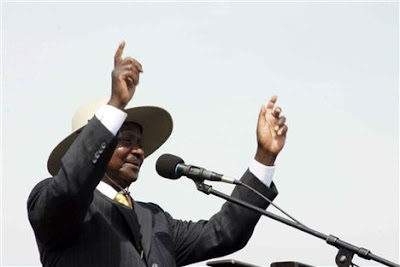 And so it has proved once again, with incumbent President Yoweri Museveni winning another 5 years in office, which will take his cumulative time in power to 30 years, by 2016. Whilst the fact that Museveni won the presidential election on 18th February came as a surprise to no one, the scale of his victory took even some veteran Uganda commentators by surprise. The final tally gave Museveni 68%, which is a return to his 2001 level of support, and a significant improvement on the 57% he received in 2006. His main challenger, Kizza Besigye, reversed gains made across the previous two elections by polling just 26%, whilst none of the other presidential candidates secured more than 2% each.

As I've argued before, the main story of these elections was one of opposition failure. Certainly, it did not help Besigye that throughout the campaigns, he was frequently harassed by the authorities, and effectively barred from many media outlets. Nevertheless, he also made key strategic errors, in particular in his choice of locations for campaigning, and in the tone of his rhetoric in some areas (for example, in the Southwest, his discourse centred around issues of ethnicity, even though this subject is of no great concern to most voters there).

However, again this, Museveni also ran a flawless campaign throughout, using both his own (extensive) personal charisma, and his control of the levers of state, to great effect. The first element was evident from the beginning, when he kicked off his bid for re-election by releasing a 'rap song' recorded by the fashionable Fenon Studios in Kampala. The song was played on radio stations throughout the country, and played particularly well with young urban voters - a constituency that had previously been a mainstay for the opposition - thus galvanizing Museveni's campaign from the off.

From there, though, Museveni also went on to 'repair' his relations with Baganda voters (who according to some commentators, are historically the most important voting bloc in the country). He achieved this by granting two key concessions. The first was to reopen the Buganda Kingdom's FM radio station, which had been closed since the Baganda-nationalist riots of September 2009. The second was to heavily amend several contested clauses within the Institution of Cultural Leaders Bill - which was passed into law on 31st January - related to the limiting the movement of Uganda's monarchs. Many Baganda felt that the original wording would have overly restricted the activities of their own king, Kabaka Mutebi II. 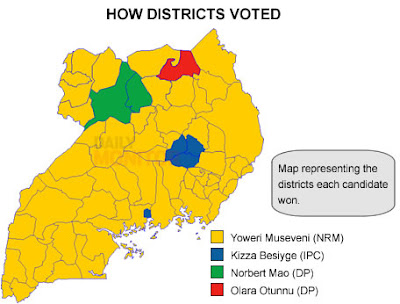 In the North, too, Museveni also made significant gains among the local electorate. Certainly, this was helped by the largesse he had at his disposal following the notorious 'failed' Juba peace agreement with the Lord's Resistance Army (LRA) in November 2008. Although Joseph Kony infamously failed to sign that peace agreement at the 11th hour, those international donors who had made commitments to the reconstruction effort that would follow its signing still made good on their commitments. Thus, over the last 2 years, tens of millions of dollars of new donor money have been flowing into the LRA-effected parts of Northern Uganda. And as Museveni has moved around those same areas during these campaigns, he left no one in any doubt as to who had to thank for this new money. Yet so too, his rhetoric also seemed more in tune with local concerns over land issues, especially in the potentially most contested areas of Bunyoro. It is for these reasons, then, that Museveni won in all but three Northern districts - an outcome that would have seemed almost impossible even 18 months ago.

Moreover, donor money was not the only largesse that Museveni distributed during these campaigns. In addition, Museveni also gave out 'new district' status to a number of regions (including Kapelebyong, in the east, and Nabilatuk, in the north). This follows his long-standing policy of using increased decentralization - and the new revenues it generates - as a means for satisfying local elites. Elsewhere, the connection between Museveni's campaign and the distribution of state funds was even more direct. My favourite example was from Mbarara Town, where National Resistance Movement (NRM) officials literally handed out cash to trading associations in the town, in return for their support.

In this context, then, the scale of Museveni's victory is not really as surprising as it at first appears. The key questions, then, are how and when Museveni might ever be removed from office? Certainly, this current result would suggest that the opposition momentum which had been built up over a decade or more has now dissipated. Yet if this is the case, then it might suggest that Museveni will simply never be beaten at the polls. Debate continues over whether Museveni might eventually hand over power to his son, Kainerugaba Muhoozi. However, this doesn't seem likely in the short term. In addition, it is possible that he might eventually face some sort of internal challenge from with the NRM (perhaps led by someone such as Minister of Security Amama Mbabazi). However, regime insiders have the prospect of impending oil production and associated revenues as an incentive to remain inside the tent, and it is thus unlikely that they are going to 'rock the boat' anytime soon.

Thus, it is NO CHANGE! as they having been saying in Uganda for many years and, it seems quite likely, will be continuing to say for some time to come.
Posted by Dr Richard Vokes at 10:51 AM 4 comments:

Email ThisBlogThis!Share to TwitterShare to FacebookShare to Pinterest
Labels: Elections

Kizza Besigye should be doing better in the current campaigns. Having eroded Museveni's share of the vote across the last two presidential elections (Museveni received 75% in 1996, but only 69% in 2001 and 57% in 2006), everyone - including Besigye himself - anticipated another strong showing this time around.

Moreover, in late August, Besigye emerged from the nominations as the sole Inter-Party Cooperation (IPC) candidate, and therefore in his strongest position ever. At the time, the IPC was made up of Besigye's own Forum for Democratic Change (FDC) as well as the Uganda People's Congress (UPC), the Justice Forum (JEEMA) and the Social Democratic Party (SDP). Besigye secured the nomination after seeing off a strong challenge from UPC leader Olara Otunnu, thanks in part to a major strategic error that Otunnu made in the latter stages of the nomination process, by calling for the IPC to withdraw from the election, in protest at the perceived bias of the Electoral Commission (EC).

Otunnu's suggestion to withdraw may well have been influenced by recent events in Burundi, in which opposition parties similarly withdrew from the June 2010 presidential polls, in a move which significantly undermined incumbent President Pierre Nkurunziza's eventual victory. However, in Uganda, the very suggestion of just pulling out appeared to contradict the main opposition parties' proud democratic traditions (which are most keenly felt among Otunnu's own UPC). After all, most opposition groups had even stayed in through the notorious December 1980 elections, long after it became clear that those polls were badly flawed. Thus, although most members of the IPC, including Besigye himself, have long decried the EC's connections to the ruling National Resistance Movement (NRM), Otunnu's plan was flatly rejected by the IPC, and by large sections of the UPC. Otunnu later withdrew from the IPC, to stand for the presidency on a UPC ticket. However, a number of UPC MPs, led by former party leader Jimmy Akena, announced that they did not support him, leaving his challenge dead in the water.

With Otunnu out of the picture, Besigye was well positioned to mount a strong challenge against Museveni. However, his campaign has faltered from the outset. Certainly, a significant factor has been his near-constant harassment by the authorities. Moreover, the IPC has been in effect blocked from many media outlets (in one example, the IPC Campaign Bureau claimed in mid-December that nine regional radio stations had refused to carry any opposition content whatsoever. In addition, Museveni himself is running a much better campaign this time around than many had expected.

Nevertheless, Besigye has also made a number of key strategic errors. Firstly, in mid-September, he chose to launch his manifesto in South Africa, in an effort to appeal to the international community, and to the Ugandan Diaspora. By doing so, he presumably hoped to bolster his backing in the event of another contested election result (Besigye eventually won a partial High Court victory over the 2006 election, when it was ruled that 'irregularities' had taken place in those polls). However, in light of the Otunnu affair - during which Besigye was in effect forced to confirm his faith in the EC (he went on to say on radio that there will be 'no rigging' in the current election, and that he will not contest this result through the courts) - the move to South Africa now appears to have been wasted.

Secondly, Besigye has made a huge mistake in these campaigns by concentrating his own campaigning upon the rural areas. The problem is that much of the IPC's appeal to date has been to a mainly urban base (especially of young, educated voters), and thus may not address rural concerns. This was highlighted, for example, during Besigye's recent campaigns in the north-west, during which he spoke a great deal about the distribution of future revenues from the region's recently discovered oil reserves. While this issue will affect the political landscape in years to come, few people in the rural areas would today regard it as nearly as pressing as, say, the region's land issues.

As a result, then, Besigye's support has slumped in recent opinion polls. His response has been to file a High Court injunction, compelling the EC to postpone the elections, on the basis that as many as 4 million new voters will not have been issued with voter cards by the time of the 18th February polls. The move was a new tactic, in that it again attacked the EC, although this time not for its bias, but for its incompetence. However, the injunction was rejected, the High Court ruling that the elections can go ahead without the voter cards.

It is in this context, then, that over the last couple of weeks, Besigye's rhetoric has become more confrontational, and he now claims that the IPC may withdraw from the elections after all, given that the elections will be rigged. This latest move is doubtless designed to renew his appeal to the international community, and to the Diaspora. However, in light of his previous rejection of these same arguments when Otunnu made them, and his own subsequent statements about his faith in the electoral process, the current rhetoric sounds quite peculiar indeed. In addition, in recent days Besigye has sought to raise the temperature still further, by raising the spectre of Egypt, by referring to the current government as a 'dictatorship', and by making oblique references to 'popular unrest'.

If tensions continue to rise here, then Uganda may well be in for a bumpy few weeks. We will find out soon enough.