A nation of drunkards?

Earlier this week, the head of the Kampala-based Serenity Centre for Alcoholics Rehabilitation, David Kalema, claimed that 3 million Ugandans (approximately 10% of the population) drink excessively, with a further 1.5 million being 'vulnerable to alcohol'. The comments are apparently based on figures published by the WHO.

However, Kalema then went on to blame all of Uganda's social ills, from poverty, to unemployment, to family breakdown, to HIV/AIDS, to car accidents on alcohol.

The argument that alcohol consumption in Uganda is both excessive, and a generally bad thing, is one that is shared by most of the development community. Indeed, I have yet to meet any development professional who does not share these views (even though they might not always express them as forcefully as Mr. Kalema), and I have yet to read any development report that does not decry the 'evils of alcohol'.

However, it is interesting to note that the academic literature on alcohol in Africa frequently takes an almost diametrically opposite line on the social effects of alcohol. Thus, rather than seeing alcohol consumption as the root of social degeneration, a range of academic studies from Uganda and elsewhere have instead emphasized the importance of drinking events - in both rural and urban settings - as a key means of social cohesion (especially amongst men), as the basis of many types of ongoing exchange relations, and as spaces for political mobilization.

At least part of the answer here may be found if we take a longer time perspective. Drawing on the historical evidence from South-western Uganda, it is clear that by the mid-nineteenth century, at least, most social events, from ritual exchanges, to weddings, to funerals etc. involved some form of alcohol consumption. Originally, this involved millet beer (amarwa), although following the establishment of bananas as the staple - from around the late-nineteenth century onwards - this was generally replaced by banana wine (tonto).

Even today, most social events in this region involve an exchange of tonto, whilst daily social life frequently also revolves around sharing a glass or two with some or other relative, neighbour or friend (this is especially true for men, and for either younger, or older, women). In addition, the social networks which emerge from these daily drinking practices fulfill an important role, their members often helping each other to gather a harvest, raise school fees, or to deal with some sort of crisis (for example, I was once living in a village during a period of prolonging famine, during which drinking groups of this sort met daily to discuss survival strategies for their members' households).

Thus, drinking practices, and the social forms these create, are central to sociality in this region. However, it is also true that some later developments have had some less propitious effects. Specifically, during the Second World War, thousands of Ugandan men served abroad in the King's African Rifles (KAR), and upon their return, brought back knowledge of 'the bar', and of the practices of stilling. Thus, from the 1950s onwards, bars were established in villages throughout Uganda, which now sold not tonto, but its stilled variant, waragi. In other words, alcohol became both commercialized, and much (much!) stronger.

Also in the 1950s, commercially bottled beer became widely available, with the establishment of Nile Breweries (in Jinja, in 1956), and the expansion of the Kenyan giant, East African Breweries, into the Ugandan market at around the same time.

The commercialization of alcohol changed the way in which tonto was produced. Previously, someone who was brewing a batch of the drink would make only enough to give to his 'exchange partners'. Now, on the other hand, a brewer was guaranteed that any excess could be sold to a local bar, and as a result, people began to produce much more than they needed. Young men, in particular, began to give over more and more of their plantations to the tonto-making variety of bananas (embiire); in effect, embiire became a cash-crop. And one result of this was that more and more tonto began to circulate in the villages than ever before. It was in this context, then, that bar owners increasingly used up the 'excess' tonto by making waragi (it takes about 25 litres of tonto to make 1 litre of waragi. In addition, there is also the advantage that even 'stale' tonto - that which has become too sour to drink - can be used for stilling). And the result of this was more and more waragi.

Moreover, throughout the colonial period, Ugandans were effectively banned from buying alcohol, the sale of which was reserved for Europeans (the historian Justin Willis has written very well about this in his book 'Potent Brews', 2002). However, as elsewhere, the result of such prohibition was to stimulate the desire for commercial drinks. Thus, as soon as tonto, waragi and branded drinks became available for purchase, their purchase became marked as an act of status and prestige (an act that more and more people were able to achieve, as cash incomes became ever higher, at all levels of society, from the 1960s onwards). Today, all of this holds just astrue for a local village man who celebrates the sale of his cow by buying everyone in the bar waragi, as it is for the state minister who displays his status by serving everyone at his party with Johnny Walker whiskey.

So Mr. Kalema's comments are overly-pessimistic, certainly. Much academic, especially ethnographic, research has shown how crucial alcohol is to (male) sociality in this part of the world, and beyond. Nevertheless, the history of production and consumption in this region also reveals that the amount, and the strength, of alcohol in circulation has become ever higher over the last half century or so.
Posted by Dr Richard Vokes at 11:20 PM No comments:

Email ThisBlogThis!Share to TwitterShare to FacebookShare to Pinterest
Labels: Beer 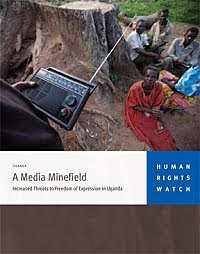