Recent weeks have seen a number of significant developments in Uganda’s nascent oil sector, which in combination, may speed up the start of production. The first occurred on 21st March, when President Museveni finally signed into law the Petroleum (Exploration, Development, Production and Value Addition) Bill. The bill – which is designed to be the first of three new pieces of legislation relating to country’s recent oil finds in the Lake Albertine Graeburn – had taken more than two and a half years to get through parliament, following a sustained challenge led by a group of rebel MPs within the ruling National Resistance Movement (NRM). Then, on 3rd April, a three-member arbitration panel in London found in favour of the Ugandan government in its long-running legal dispute with Canada’s Heritage Oil (over US$434 million which Kampala claims it is owed in capital gains tax on Heritage’s 2009 sale of its oil rights in Uganda to Ireland’s Tullow Oil). Although the decision does not end the dispute – despite the Ugandan government’s claim to the contrary – it nevertheless significantly strengthens the legal basis for Kampala’s future dealings with international mining companies operating in the country. Finally, on 15th April, the government announced that it had finally reached a decision on the building of a new oil refinery at Kabaale-Biseruka (which is close to the newly discovered fields) – in which the government hopes to retain a 40% stake. On the one hand, the planned refinery is much smaller than the one the government had hoped for: the new plant will have an initial capacity of only 30,000 barrels per day (b/d), which is significantly lower than the 200,000 b/d originally envisaged. Yet on the other, this means that the refinery will be much cheaper to build, and will therefore come on-stream much more quickly. 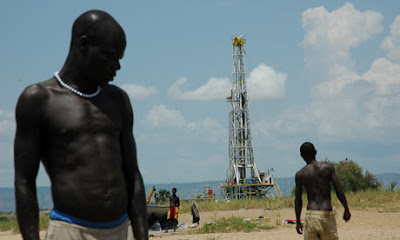 These potential breakthroughs with the oil sector come at an important time for the Ugandan government, which is still struggling with the fall-out from November’s aid suspensions by many of the country’s main donors. The donors’ coordinated action – which followed allegations that the Office of Prime Minister Amama Mbabazi had embezzled US$13 million of aid meant for the Peace, Recovery and Development Plan for Northern Uganda (PRDP) – involved the freezing of the entire Joint Budget Support Framework (JBSF) for 2013, and has left the government with a shortfall of US$300 million (7.1%) in its annual budget. In response, in early March the Finance Ministry was forced to publish a revised budget which envisaged deep cuts to ministries’ spending, and to social service provision, as well as a reduction in infrastructural investment. Anecdotal evidence suggests that large numbers of civil servants have already gone several months without pay. In addition, the government have also now revised downwards their growth forecasts for 2013, from 5%, to 4.2%. All of this, then, combined with country’s still very high inflation rate, has left the government facing a severe economic crisis.

On the one hand, the donors’ recent actions have once again highlighted the ineffectiveness of aid suspensions as a policy device. As with the similar suspensions that were recently imposed on Rwanda, the donors – even as they were coordinating their actions – don’t seem to have given much thought as to what they were trying to achieve in the process. Certainly, no explicit demands appear to have been made of the Ugandan government, other than by Sweden (which in late November, demanded that Kampala repay in full the US$6.7 million that Stockholm had contributed to the PRDP). As a result, other than impacting the rank and file of civil servants (who have not been paid in 2013) and presumably also those members of the Ugandan public who rely on social services, it is not clear what effects the aid suspensions are likely to achieve. In an attempt to assuage the donors – and to overturn the suspensions – in November, the Ugandan government ordered the office of the Audit-General to begin a ‘forensic audit’ exercise on the accounts of all government departments, to try to identify fraudulent activity. The following month, they also introduced a ‘High Level Government Finance Reform Action Matrix’, as a general measure aimed at improving economic governance in the country. In addition, the Bank of Uganda (BOU) has also now pledged to reform the system through which bank accounts are set up in the country (in an attempt to reduce the number of ‘ghosts accounts’ through which embezzled funds are frequently channelled.

However, none of this is likely to have much impact on the activities of the upper-echelons of the NRM - or those with connections to senior figures. Moreover, pressure on the president to target senior colleagues such as Mbabazi has been further weakened, over the past month or so, by growing divisions within the donor community over when the suspensions should end. Following an early-March meeting of all members of the JBSF in Kampala, it emerged that only Britain (which appears to have been the driving force behind the frieze in the first place), as well as Sweden and Denmark, remain committed to the ongoing aid suspensions. Meanwhile, Germany, Ireland, the EU and others have all now indicated that they favour a resumption of aid to Kampala, probably by the year’s end. Yet unless the donors can present a ‘united front’ to Uganda over the action, it is doubtful that the suspensions – however long they are in effect for – will exert any real political pressure in the country.

On the other hand, though, the recent aid suspensions have had a marked effect in accelerating the government’s current drift towards ‘economic nationalism’. Museveni’s desire to move in this direction has been evident at least since the publication of the recent National Development Plan (NDP), in April 2010. Whilst not advocating full-blown protectionism, the NDP certainly envisages the government exerting much greater control over its own economy. The current aid suspensions have then further accelerated the government’s moves down this line, as evidenced both by their recent moves aimed at getting oil production on-stream as quickly as possible, and by their related shift towards China as a source for development finance. In addition to being heavily involved in Uganda’s oil plans – through the state-owned China National Offshore Oil Company (CNOOC) – in mid-April Beijing agreed a new US$9.8 million loan to Kampala. Crucially, the new loan, which is part of the US$20 billion that China pledged to Africa in July, appears to have no conditionalities whatsoever attached to it, and the money can therefore be spent entirely at the Ugandan government’s discretion. It also follows another loan, of US$350 million, that China Exim Bank gave to Uganda last year, which the government is planning to spend on a new Entebbe-Kampala road. In these ways, then, Kampala appears to have much greater control over the new Chinese aid than it ever has with monies provided by the ‘traditional donors’.

However, despite the recent progress that has been made with oil, President Museveni now faces a number of serious obstacle in his plans to further develop the nascent sector, and to use this to further his grip on the domestic economy. In particular, a group of young rebel MPs within the ruling party have vowed to block the presidents moves at every turn. The group has become particularly emboldened since the election of the current (ninth) parliament, in February 2011, during which they have also made oil issues their particular cause celebre. It is this group that was primarily responsible for delaying the first Petroleum bill for so long, and they are now gearing up for a serious fight over thelast piece of planned oil-related legislation: the Public Finance Bill 2012 (which includes an extended section on ‘Petroleum Revenue Management’). Although Museveni has expressed a desire to have this new law passed within the next few months, the ‘young turks’ – supported by the large sections of the media – have vowed to side with the parliamentary opposition in order to defeat it.

In response to the growing threat posed by these rebel MPs, in January, Museveni briefly vowed to suspend parliament, and to impose martial law on the county – a threat that was later repeated by the head of the army, General Aronda Nyakairima. However, if the aim of the threat was to silence the young turks, then it backfired spectacularly, because it galvanized support for the group not only in parliament, but among the wider population as well. In addition, Museveni’s threat of a ‘palace coup’ also drew a strong reaction from the international community. Nevertheless, over recent months the executive has continuously targeted individual rebels. In December, one of the group’s most outspoken members, Cerinah Nebanda (former MP for Butaleja District), was found dead at a clinic in Kampala, in apparently mysterious circumstances. The government initially claimed that she had been the victim of a drug overdose. However, following apparent discrepancies with the autopsy results, Museveni himself was forced to give two press conferences denying official involvement.

Then, in January, another leading rebel figure, Theodore Ssekikubo (MP for Lwemiyaga) was arrested on charges of ‘inciting violence’, for a speech he made at Nebanda’s funeral. Although he was later released without charge, in early April, Ssekikubo, along with three other members sitting MPs (Wilfred Niwagaba, Muhammed Nsereko and Barnabas Tinkasiimire), were officially expelled from the NRM. The expulsions have set up a potential constitutional crisis, in that being expelled from the party does not necessarily require the four MPs to stand down from parliament – even though this is the president’s obvious wish. Interestingly, the person who will now have to deliberate on the matter in non other than Speaker of the House Rebecca Kadaga who, although the Vice Chairperson of the NRM, is  also the de facto leader of the rebel group, and is one of Museveni’s most outspoken critics. As if all of this doesn’t make the president’s task of silencing parliamentary criticism over oil difficult enough, Museveni is also faced with a resurgent opposition Forum for Democratic Change (FDC), who have been galvanized by the recent election of their new leader, Mugisha Muntu.

With real momentum now developing around the nascent oil sector, it is possible that production might now begin sooner rather than later (although exact predictions as to when exactly when this will be remain notoriously difficult to make). But whether this does signal a genuine shift towards economic nationalism in Uganda will depend very much on how the JBSF donors position themselves in the months ahead. Yet with China becoming increasingly influential in the country, and with Beijing increasingly being viewed by the government as their favoured ‘development partner’, a genuine shift in lines of influence is now possible. In the end, it may be an alliance of rebel government MPs and opposition members who are best placed to check the excesses of the Museveni executive for the foreseeable future.
Posted by Dr Richard Vokes at 6:06 PM